Collector of the Month: Rich Barone

Welcome to our new feature, Collector of the Month! Every month, we’ll spotlight one of our valued collectors here on the blog, and showcase their collection. The great thing about sports collectors is that they are all very different in what they collect, how they collect items and what they do once they have them. So each month should reveal a unique spin on this hobby. One thing they do all have in common, however is a passion that is seldom found in any other group. This month, we’ll spend some time with Rich Barone of Dix Hill, NY. 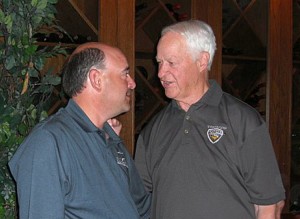 Rich fell in love with trading cards when he opened his first pack at the age of five. Nobody else in his family collected, but there was a love for sports in the home he grew up in, especially for New York teams.

“I am a huge New York fan,” said Rich Barone. “They say as a New Yorker you are not allowed to root for the Mets and the Yankees, but I don’t see anything wrong with that.”

Barone had a special affinity for Yankee Stadium in particular, “You have never been to a game until you have been to the cathedral in the Bronx, Yankee Stadium. I am still upset, as is every Yankee fan, they are tearing down the Stadium.” 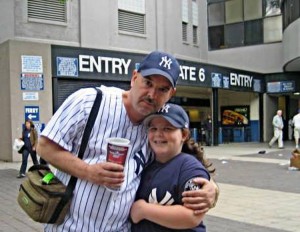 One of Barone’s favorite items to collect is game-worn jerseys. Most collectors will have these framed or put them in away in a closet, but Rich prefers to wear them right on his back. Barone says, “Yes, people cannot believe that I would wear a game-worn jersey of Sidney Crosby, Nolan Ryan or Joe Namath, but I feel like they should be worn.” 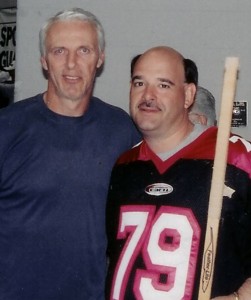 Say what you want about wearing a game-worn jersey of a premier athlete, you cannot argue it helps get you closer to them. The other way Barone likes to get close to his favorite players is by opening Upper Deck trading cards.

“Next to my family, there is no greater thrill for me than opening boxes of cards to find an autograph or memorabilia card of my favorite players like Nolan Ryan, Derek Jeter, Joe Namath, Mike Bossy and others.”

When Barone’s collection grew to a point where they were running out of room, he added on another room to his house.

“I have been called insane for this hobby by fellow collectors and friends, but I love it,” explained Barone. “This hobby has granted me the pleasure of meeting a lot of people who I now consider good friends. I will trade, but I will not sell. I am a true collector.”

One of Barone’s favorite things to show off is his Nolan Ryan room where he has over 8,000 Nolan Ryan cards. Of these, 82 of the cards are one-of-ones, over 200 are autographed and over 1,000 are memorabilia cards.  And don’t forget about all the Nolan Ryan game-used and signed jerseys. 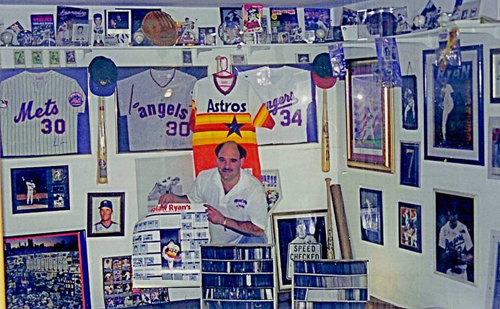 If he’s not at a game with his family or busy working in the entertainment industry, you can usually catch Rich at his favorite shop, Grand Slam Collectibles in West Islip, NY.  The owner Frank takes good care of the man who has the smile of a five year-old when he opens a pack to find one of his favorite New York players. 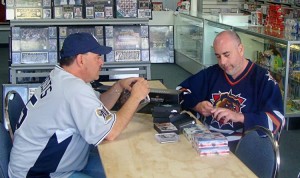 Rich is a great guy and very deserving of the honor of being UD first Collector of the Month.

I met Rich this weekend and quickly learned how passionate he is for the hobby. A true collector, and fun guy to dine with.