In case you missed the intro to our current four part series, I held four historical autographs all at once, to be revealed here each week. Thus far, we’ve highlighted Napoleon Bonaparte, and historical American athlete Jack Johnson. Today? John Gotti. 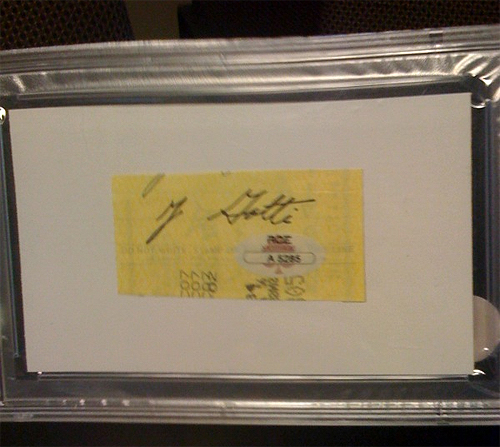 I was going to write something witty today (along with my usual semi-snark given this kind of subject), but then I checked out Gotti’s history on Wikipedia. Wowza.

Even though he died in 2002, let’s just say I was born and raised in New York, and I’m going to play it safe. Nothing to see here, move along. Especially if you’re one of his friends, I would never say anything bad about Mr. Gotti. In fact, I feel honored to have held his autograph in the first place. A lucky Upper Deck customer will own it in the near future.

Next week: Our fourth historical figure rounds out the group.