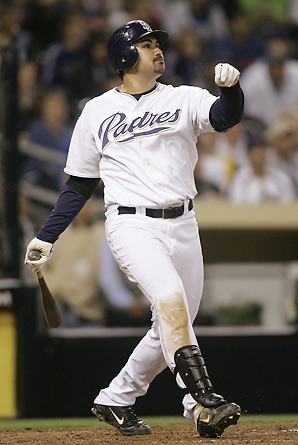 For my money, one of the most lopsided trades of say, the last ten years, has to be the deal where the Padres sent Adam Eaton and Akinori Otsuka to the Texas Rangers in 2006, getting back Termel Sledge, Chris Young, and most importantly, Adrian Gonzalez. “A-Gone” had been a #1 overall pick by the Florida Marlins (since traded to the Rangers), but was blocked by Mark Teixeira’s great hitting and Gold Glove level defense at first base. Given nowhere to put him (except DH, but that would have been a waste of Gonzalez’s equally proficient glove), and with unspectacular performances with the few at bats he was given, the Rangers decided to package him off to get some pitching help. Eaton floundered and Otsuka had a productive season or two before injuries sidelined him. Meanwhile, the Padres got an effective, bonafide #2 starter in Young (ok, at least when he’s not getting injured, and he hasn’t quite been the same since that Albert Pujols line drive busted up his nose). And today, Gonzalez has flourished into one of the best first basemen in the game. But since he plays here in San Diego (where he was born and raised), for a team that is not in contention and won’t be all year, you wouldn’t know it.

More specifically, Gonzalez just smacked his 20th home run of the year, giving him more than anyone in Major League Baseball right now. He’s also done this in a home park that suppresses home runs like none other, with the likes of Scott Hairston and David Eckstein providing “protection” in the order. No offense to them, but this isn’t quite the same as say, the protection you’d get in a Yankees or Red Sox lineup.

The home runs would be plenty enough, but as of today he’s also hitting .287, getting on base at a .394 clip, while slugging .641. That’s good for a 1.035 OPS, for those following at home. For a better frame of reference, he’s currently second in the National League in Total Bases, with Raul Ibanez currently in first- a hitter who has the benefit of playing in a bandbox, with hitters like Rollins, Utley and Howard around him.

And yet, Adrian Gonzalez is currently in fifth place at the National League’s first base spot for this year’s All-Star game. Fifth. I can certainly understand Pujols taking a wide lead there, but Gonzalez is having a better year at the plate than Prince Fielder and Ryan Howard (without the benefit of any lineup help around him). And if you want to compare defense, the latter two have a reputation for making things interesting around the bag, and not in a good way (while Adrian is as steady as they come). So, I implore you to go cast a vote for A-Gone, and make sure he takes his rightful spot at the All-Star game this summer. 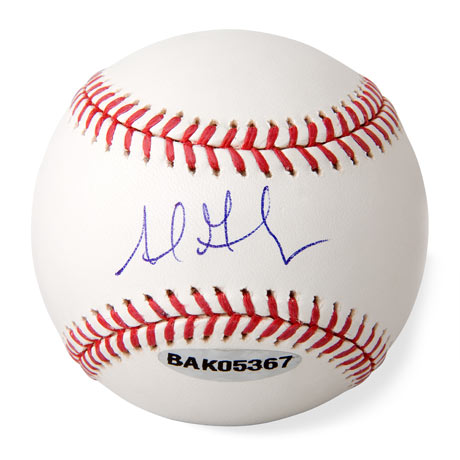 Now that I’ve finished campaigning, the bigger item here, really, is that the Padres should trade Adrian Gonzalez, and do it this season. They’ve made a point to say they’re going to build around him, and who can blame them? He’s a local guy who hits for power, hits for average, takes walks, and plays great defense. But he’s also 27, and if they keep him on board, he’ll be 30 by the time the Padres can contend again. And perhaps past his peak years.

On the other hand, if the Padres trade Gonzalez, they can more or less name their price in prospects. Combine this with a solid, if not tricky move to unload Jake Peavy’s contract through his no-trade clause (and get some prospects in return), and you have a combination that can accelerate the rebuilding process significantly. We’re talking about two packages where you can more or less pick up some of the best young, promising players in the game, and retain their services for a very long time. And thanks to spacious Petco Park, skills like defense and baserunning are amplified, while flyball pitchers can prosper. Not a bad spot to be in when going prospect shopping.

I actually doubt the trade will happen at the deadline, as Gonzalez is having too good a year, and casual fans would revolt if he was traded. Honestly though, the Padres are in pretty bad shape, and it’s not like help is on its way from the farm system. Just as they made a brilliant trade to bring him to San Diego where he flourished, it’s time to make an equally smart trade, and stock the system with promising young players who will make up the next contending Padres team for years to come.


I feel your pain with this one. I like to refer to this as the “Cal Ripken Jr” effect. Ripken was a great player but there were years when he was not the best at his position but was still voted in on his name alone. This year it will be Manny Ramirez taking an outfield spot from a player that might be having the year of his life but will never make the All Star game because he plays for a small market team. I like that the fans can vote but I think the impact of fan voting should be down sized.


[…] sounds like the team is looking into trading Adrian Gonzalez as well, but that isn’t likely to happen until the winter. Between these two moves, the team […]


[…] the National League lineup has a bench filled with star first basemen, including Prince Fielder, Adrian Gonzalez, and most importantly, Manuel’s own Ryan Howard. Manuel has implied that he’ll be […]


[…] staying home? It made all the sense in the world for the Padres to trade Adrian Gonzalez this past summer. When it didn’t happen, the common perception was that he’d be dealt come winter. […]