Extreme Sports are more popular than ever, but how do I know which one is right for me? Now please understand, I am a male in my early 30’s without a death wish so I am not looking to participate in these sports, just take them in as a spectator.

My first stop for extreme sports action was the UFC. Two guys in a steel cage beating each other to a pulp was always fun to watch on Pay-Per-View, but how would it be live? The action is amazing, but for me the problem with the UFC lies with those in attendance.

There are some of the most beautiful women I have ever seen at these events, unfortunately they are all sidled up to extremely large men, most of whom look like they could be a two-strike felon. If you make the mistake of looking at the girl they are with, you will likely receive a look that will make you feel like you just made the undercard. I want to enjoy a spectator sport, not spend the evening planning my exit strategy, so the UFC did not really work for me.

Next I decided to try the X-Games. I mean they created the category, right? Now that was a lot of fun, but it still did not feel right. As great as it was to take in a spectacle like the Big Air events, I couldn’t help but feel very old as this spectator sport is predominantly for teens.

When I heard about the Red Bull Air Races, I certainly did not say to myself, “This is for me.” The only time I get excited about airplanes is when my first class upgrade comes through so I did not expect much. I could not really understand who would even go to something like this. After seeing Kim Kardashian and Reggie Bush at the Opening Night party and Shaun White at the Race Club Sunday, I got fired up. Red Bull had attracted some solid celebrity talent, so there had to be something to this. 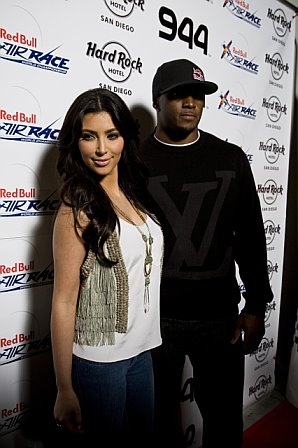 When I got to the event Sunday, I was also loving the type of people the Red Bull Air Races had drawn. There were families and singles, people young and old, just festive folks who seemed ready to enjoy a day near the water under the San Diego sun. And the good people at Red Bull really knew how to put on a show. There were exhibitions from the Coast Guard and Navy, Red Bull showcased their amazing helicopter and racing boat all followed by a very impressive flyover from the Air Force. And then there were the Air Races. 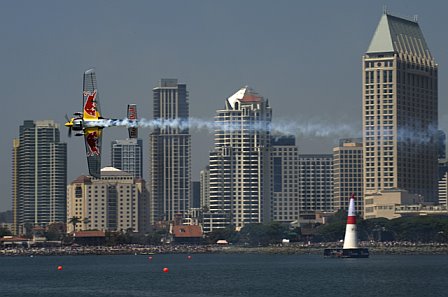 Against the blue sky and San Diego skyline, these intrepid pilots rocketed through a course of floating air gates that made me wonder initially if this was safe considering how close they flew to the water, and the spectators. As I watched more, I realized just how in control these pilots were with each one seeming to have their own style. Their styles were not the only things that differentiated them as it seemed like each of them carried a different passport while some looked like fathers and others looked like grandfathers. 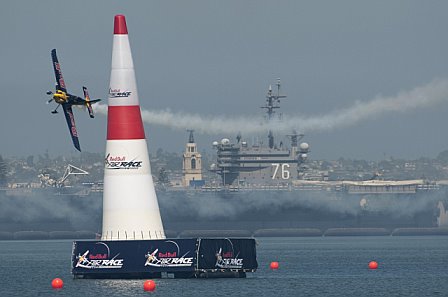 One of the stranger events of the finals occurred when a pelican struck the plane of the reigning World Champion Hannes Arch. Luckily Arch was able to maintain control and still post a respectable time, taking third for the contest. So the day belonged to the French pilot Nicolas Ivanoff who took the victory, but he still has his work cut out for him. There are four more action packed legs of the Red Bull Air Race World Championships this summer, but unfortunately none of them are in the United States. 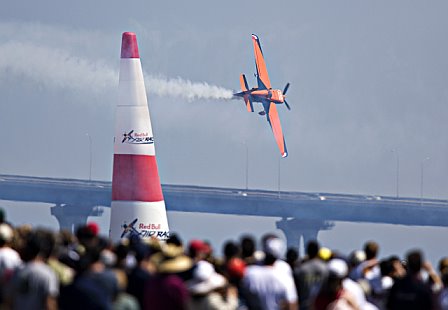 While I won’t be rushing out to put a Michael Goulian poster on my wall, I can say that I thoroughly enjoyed the event Red Bull put on and I am looking forward to it next year. I think the 100,000 plus in attendance would agree . . . with the exception of those who forgot sunscreen and one unfortunate wayward pelican. 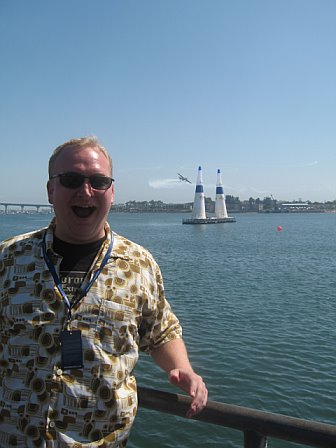