Here’s the video from the second inning:

8:16: It’s official: Stephen Strasburg has thrown a no-hitter. I was sure to make it down to the field to see it firsthand (not to mention capturing some video for you guys, which will be up soon). Easily one of the most remarkable things I’ve seen as a baseball fan, certainly in person. Not necessarily because of what he did, but because it shows what he will do. And that is too exciting for words.

7:57: Not to jinx anything, but I’ll be going out to the field to capture Strasburg’s ninth inning, just in case…

7:55: Not much doing for SDSU in the seventh. Strasburg’s first pitch in the 8th to Jon McMahon was inside, getting the crowd to gasp. Grounded out. Very weak hit straight to first baseman for out #2. Randhawa grounds out to short for the third out. One inning away from the no-hitter. Not to be redundant, but Strasburg’s innings have been remarkably quick and efficient today.

7:38: Leadoff hitter Pat Colwell got on base and caused all kinds of havok, making his way to third thanks to some stealing and tagging up (with an out inbetween). Next hitter was walked,  Air Force SS Randhawa couldn’t make the play on the following batter, and SDSU went up 2-0. Mitch Blackburn got another RBI to keep the inning going, and Torres had a long fly to end it. 3-0, SDSU.

7:16: Another walk, but the no-hitter is intact through six. I’ve got MLB.com’s Jonathan Mayo next to me, and we were discussing his curve, and how it’s not your traditional 12-6. More horizontal movement, hard to track. Sick. Six innings, twelve strikeouts.

7:10: In all fairness here, I need to slow down a bit. There’s more than one guy playing baseball today. Air Force pitcher Casey Allen had a one hitter going through four, looking pretty good. That is, until SDSU DH Jomel Torres got a double, followed by Easton Gust’s RBI single to break the scoreless game. Still, Allen is holding his own here. Not much was expected, given that he came into this game with a 7.22 ERA, but he’s kept San Diego State’s hitters off balance so far.

Batter 2: First pitch ball, then heater for a swing and miss. Sick high fastball for strike two. Slider on the corner almost gets him to chase, count 2-2. Next pitch pop-up, second out.

Batter 3: Weak groundout to the first baseman, and we’re done.

6:48 PM: No longer perfect through four, sadly. Nathan Carter drew a walk, and the next batter actually got a ball into the outfield. Even though it was caught, you got the vibe that fans realized Strasburg is actually human at that moment. Kind of. Quote from the press box: “What’s with this guy? First he walks a batter, next he lets a ball out of the infield. Is he hurt?”

Not like it mattered much: next batter struck out (from here, it looked like a nasty changeup for strike three), and Carter was thrown out trying to steal.

I have to say, the buzz regarding his changeup wasn’t as strong as the hype on his other pitches, and granted it’s hard to tell given what he’s throwing. But when he slows it down, whether it’s a breaking ball or a change, it’s a huge shift in speeds. Has to be incredibly frustrating for the batter.

Huge crowd tonight, as to be expected. 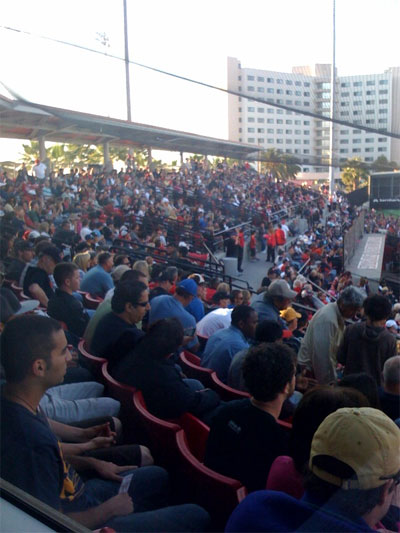 In case you’re curious, here’s my view from the press box. Got here early, so I’m front row: 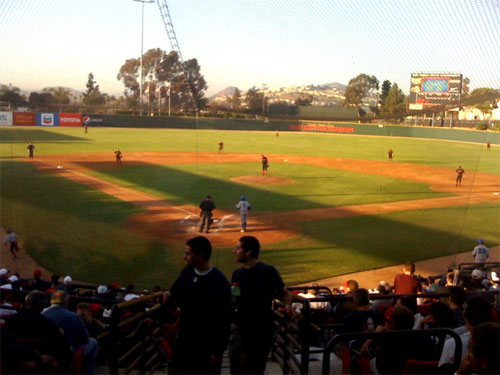 A bit of a different way to watch a game, for sure. The good part though, is everyone here is equally impressed by Strasburg’s stuff. So I don’t feel like too much of a fanboy when I express my amazement.

6:31: Perfect through three innings, seven K’s. You get the feeling the crowd will be a little disappointed if one blue Air Force jersey reaches base.

6:22: Got out of the press box and to the lower level for the second inning, and it’s amazing to see Strasburg up close. Six batters, five strikeouts. Only one batter has made anything close to solid contact, a grounder to the infield. Video to follow. The hot dog will have to wait.

6:09: That was so unfair. What really amazed me is that this guy is a pitcher. First batter, he led with the breaking balls, then went to the fastball. Batter didn’t have a chance. He’s mixing up his arsenal, changing speeds, and locating. This is not some kid who just goes out there and throws hard.

6:02: Just heard the national anthem. Here’s the deal, loyal readers: I’m going to sit here and fully enjoy Stephen’s first inning. Then, I’m going to give you my first impressions, get a hot dog, and hopefully get some video of him pitching the second inning.

5:53: The announcer just called out Strasburg’s name in the lineup and I came this close to clapping, on instinct. Then I remembered I’m in the press box, with veteran reporters. Good catch Toby, that would have been embarrassing.

Look who hasn’t lost a game. Sick ERA too. 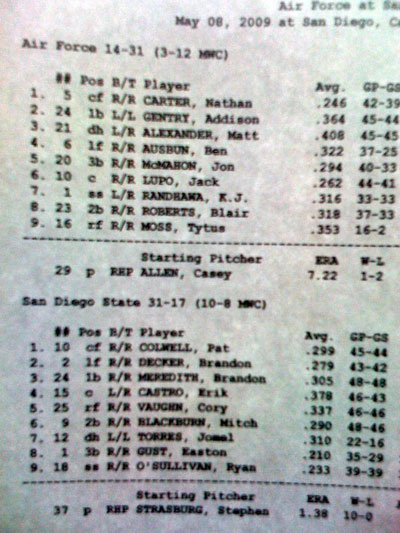 
[…] Live blogging makes it a bit difficult to step outside the moment and analyze what you’re seeing on a deeper level; usually not a big deal, but considering what happened today, I think it’s important to decompress a bit and let you fine readers know what it was like to be there. […]


[…] from some negative news coupled with Steven Strasburg’s no-hitter on Friday, this past weekend’s baseball happenings centered around a number of situations where […]


[…] Nationals: Am I crazy? Perhaps. But the Nationals’ biggest issue right now is pitching. Slot Strasburg behind Peavy, put John Lannan into the #3 slot, and suddenly you have a serious rotation. The […]


[…] is doing its best to hype up the draft moving forward, and this year will prove to be a bit easier thanks to Strasburg Mania. The draft starts tomorrow, and there’s little doubt the Washington Nationals will take him […]


This guy, as far as pitchers are concerned, is as close to a lock as possible. Future All-Star, for sure.