It’s rare that I’ve ever seen a player lose control of his emotions during a playoff game as badly as Kris Versteeg did in Game 4 of the Western Conference Finals on Sunday afternoon. With his team already trailing 4-1 in the second period, teammate Matt Walker was spotted for an interference penalty, and the referee’s arm went up for a delayed penalty. Before Mr. Walker could be escorted to the box though, Versteeg decided to join him for his 2-minute breather, and cross-checked a Detroit player after the whistle about five feet in front of a referee, giving Detroit a full 2 minutes of a five-on-three power play, on which they scored, of course, to make it 5-1.

Walker returned to the ice following that score, but Versteeg served the rest of his 2 minutes, then returned to the ice and immediately took an interference penalty of his own about five strides out of the box to give the deadly Wings power-play unit yet another man advantage. He ended up with 12:41 of ice time for the game to go with 14 penalty minutes, 10 coming on a misconduct call in the third period.

Coach Joel Quenneville should have benched his talented young scorer to teach him a lesson — don’t do that kind of stuff, don’t lose your head. Alas, that might have been an awkward conversation, coming so soon after Quenneville himself was seen launching a profanity-laced tirade at the officials as cameras scanned the player benches to start the second period. I’d link to it, but even without a microphone to capture the sound you can clearly see a rapid-fire succession of F-bombs tumbling from his mouth. Good stuff. 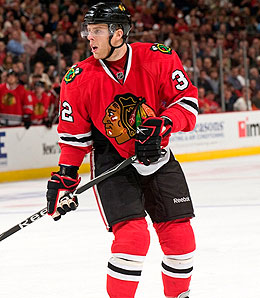 Everybody knew the Blackhawks had their work cut out for them entering the series against the defending Stanley Cup champs. It would have taken the best they had to knock off Detroit — from goaltending to team defense to the continued stellar play of young forwards Versteeg, Patrick Kane and Jonathan Toews. But I don’t think anybody counted on their coach letting them down like he has. Sunday was not the first time in this series Quenneville could be seen screaming at the officials.

To quickly set the scene, there was a minor scrum after the horn sounded to end the first period, a pretty ordinary nothing-to-see-here sort of dust-up that is very common this time of year. To the astonishment of many — obviously including Quenneville — Walker was the only player assessed a penalty, 2 minutes for roughing. Quenneville, clearly, did not agree with the call. Detroit predictably scored on the ensuing power play, making it 3-0. To be fair, it was a pretty bad call from looking at it on TV, and Quenneville certainly had a point.

As if his shouting and swearing and carrying on during the game — when theoretically his team still had the power to affect the outcome of the game — wasn’t bad enough, he elaborated on his reasoning for the temper tantrum after the game by calling the penalty “the worst call in the history of sports”, a comment for which he was fined $10,000. It was a pretty bad call, it certainly came at a critical point in the game, and the results were devastating for the Blackhawks. You could probably view the fact Quenneville didn’t receive a bench minor for the tirade as acknowledgement from the refs they shouldn’t have given the initial penalty. Whatever the case, the coach set the tone for his team for the rest of the game, and Chicago took 48 minutes of penalties in the final two periods — not recommended when you need multiple goals against the best team in hockey to avoid staring into the abyss as the ’Hawks now do.

I think Detroit wins Game 5 tonight on home ice, even with Pavel Datsyuk and Nicklas Lidstrom — two of the 10 best hockey players on the planet — missing from its lineup. That certainly levels the playing field a little bit, though it obviously didn’t seem to bother the Wings much in the 6-1, Game 4 pasting of Chicago on their own home ice. Incidentally, the Blackhawks will be without Nikolai Khabibulin in goal, and Martin Havlat will sit out with post-concussion symptoms.

• Speaking of Havlat, Brian Campbell was one of the most outspoken players on the Blackhawks roster in calling Niklas Kronwall’s goodnight kiss of Havlat in Game 3 a “gutless” act. Let’s pretend for a moment that Kronwall’s hit was a cheap one, though it certainly was not. Havlat had his head down, and Kronwall was given a 5-minute major for interference — not roughing or high-sticking — but interference, despite the fact that you can see on the replay that the puck is in Havlat’s skates when Kronwall delivers the blow. Campbell’s claim it’s a dirty hit because the big Swede “jumped” to hit Havlat is off the mark because if he had left his feet, the call would have been for roughing, which it was not. It’s ridiculous to think that a defenseman at any level is going to pass on that hit and wait an extra split second until Havlat actually touches the puck, because if he were to do so, the winger would probably have skated past him and created an odd-man rush. It’s counterintuitive for a defenseman, and Kronwall actually made a great read in noticing Havlat wasn’t paying attention to him, and he stepped up and eliminated him from the play. It was a smart, clean hockey play.

But just for fun, let’s pretend it wasn’t. Of all people, Brian Campbell is going to be the moral compass on this issue? Yeah that’s right, the same Brian Campbell who, while playing for the Buffalo Sabres in the 2006 playoffs, lowered his shoulder and knocked poor R.J. Umberger into la-la land on a strikingly similar play in the first game of the first round against the Flyers. If you say so Brian … hypocrite.

Around the hockey world
The Windsor Spitfires may have been the favorites coming into the 2009 Memorial Cup, but the rout they took to capture their first-ever Memorial championship was not an advisable one. The Spits lost their first two games at the tourney in Rimouski, Quebec, needing to rattle off a four-game win streak where if they’d lost any one of the contests they’d have been eliminated. But they pulled it off.

Greg Wyshynski over at Yahoo! did a great job of chronicling the many different and fascinating storylines that surrounded the Spits’ triumph, including winning for a fallen teammate and providing an uplifting distraction for a town ravaged by the slumping auto industry.

• The Phoenix Coyotes’ battle to declare Chapter 11 bankruptcy, sell then move the franchise to Hamilton, Ontario, has some pretty far-reaching implications, explains the Wall Street Journal. There are only losers in this mess, no winners. First off, how would you like to be part of the Coyotes’ season-ticket sales team these days? If the ’Yotes were hugely successful selling tickets to their games in the first place, the team probably wouldn’t be in the predicament it is, but now these poor folks have to entice fans to buy tickets to games that may or may not even take place in their community several months in advance.