A Clueless American Watches the Biggest Soccer Game of the Year. And Likes It.

My parents actually came here from Europe when they were very young, but I’m definitely an American. I like baseball, broadband everywhere, big televisions, bigger sodas, and most critical where this blog is concerned: don’t like soccer too much (I know it’s called Football out there, but for the sake of my audience, please bear with me).

Now, even though I’m an American, I’m not stubborn enough to think we’re always 100% right, especially where sports are concerned. So while I don’t really follow soccer or care much for it, it’s never been from a place of negativity. Rather, my attitude tends to be, “I grew up in a country that doesn’t care much for soccer, so I don’t watch it. But because the rest of the world loves it so much, I’m just going to admit I’m probably the one who’s wrong here and missing out on something.”

And I’m fair about it too: unless it involves say, bungee jumping or eating weird stuff (you know, Fear Factor fodder), I’m perfectly willing to try new things. Last year, I went to an LA Galaxy game with a few fellow Upper Deck employees and associated friends, some of whom were big soccer fans. I tried to like it, I really did, but halfway through I was bored out of my mind. And with the Mets doing their usual bipolar rollercoaster act (I won’t even get into the Chargers, that’s a series of posts in itself), my sports attention was more or less accounted for.

However, my friends here still love soccer, and I’ve made a number of friends overseas. So, The Sport Everyone Else Lives For Except Us Stubborn Americans never truly came off my radar. And given today’s huge Champions League Final between FC Barcelona and Manchester United, I couldn’t turn down an opportunity to watch the biggest game of the year with educated fans who could let me in on what was going on. 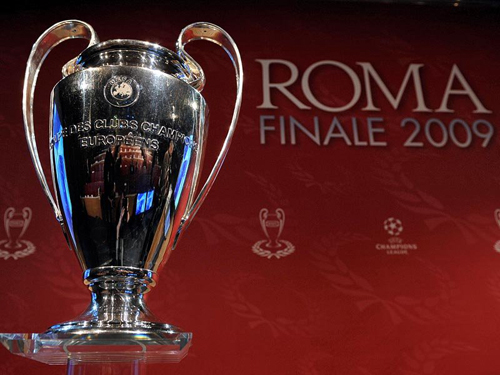 In terms of strategic insight, I apologize that I can’t provide much here. I briefly contemplated bringing a pad to take notes for this here blog, but that would have taken away from the “Can I actually enjoy this sport?” factor. It took enough mental energy for me to just process what was going on as it happened.

That being said, the key point here is that I enjoyed it. Now, there are two caveats to why, and if you’re planning to give the sport a try, I recommend the following to make it worthwhile:

With these two elements in place, I have to say I actually enjoyed watching a soccer game for the first time. I’m admittedly very ignorant about the intricate aspects of the sport, but the two goals by Barcelona were athletically brilliant by any measuring stick you can find. Samuel Eto’o’s first goal was especially impressive, as he got around a defender with a brilliant move, and managed to get off a shot literally a millisecond before a defender got in there with a tackle.

The big plays, when they happen, are breathtaking. You have to be a stiff to not stand up and gasp a bit when a team gets close and takes a shot, goal or no. And for the first time, having a captive moment where I focused on the game and had people around me who could explain things, the time between those exciting moments was interesting. Perhaps a bit boring for American eyes, sure, but every action had a purpose, and with the stakes as high as they could be, you could feel the urgency. From Barcelona, anyway. Manchester United seemed a bit flat. 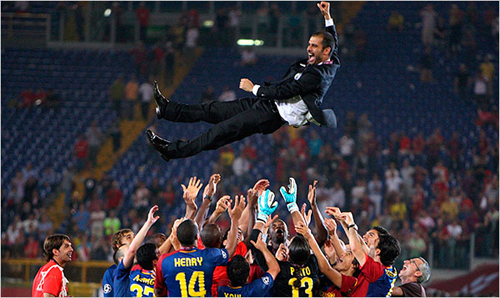 Will I become a huge soccer fan after this? Probably not. But I did truly enjoy watching a game for the first time, and now at least have a point of reference for why the rest of the world loves it so much. I’m sure I’ll watch a few World Cup games next go-around too.

So don’t feel guilty if it’s not your favorite thing in the world. It seems that a huge part of the intrigue of the game is having a team you live and die for, and in America we’re just not going to ever have that- even if you adopt a European team as your own, it’s not quite the same. At the same time though, if so many people enjoy it, there’s probably a reason. So at least give it a fair chance.

Now if you’ll excuse me, I’m going to go back to ignoring the rest of the world’s favorite sport for a while. We’ve got the NBA Finals and Stanley Cup Finals approaching, while baseball heats up. It’s a great time to be an American.

wroon.com » Blog Archive » A Clueless American Watches the Biggest Soccer Game of the Year. And Likes It.


Nice post. I hope other Americans, and my fellow Canadians, start giving soccer (football) a chance like you did.


I’m glad you took a reasoned approach. Too often, those of us that love the game are faced with fellow American who refuse to even give the game a chance. They fall into the trap of buying into the stereotypes and the ridiculous generalizations that so many of the anti-soccer talking heads and radio hosts (take a guess as to who I’m talking about) spew out.

I highly recommend that you give the National Team the same chance you gave the Champions League final; if you’re at all patriotic, it’s hard not to become invested in a team that represents the good old USA.


Glad to see you enjoyed it. Football is truly amazing when played the right way. Too often in big games the teams play so cautiously that they provide little, to no entertainment. If you can, find Luton Town vs Scunthorpe United in the JP Trophy Final on the interwebs. A huge contrast in ability level, but a game that gave far more entertainment. Luton – my home town team – are the bottom ranked team in all profesional leagues in the England, but they took 40,000 fans (including me) to Wembley stadium (home of football) and produced an incredibly exciting game. A stark contrast to the CL final, but fantastically entertaining.